UPDATE 7/13/2021: A limited number of physical copies (signed upon request) are now available. Simply claim the corresponding "reward" below and make sure to fill in your shipping info and signed/unsigned preference.

In time, you will come to ask yourself, "What is The Grizzle? What does it mean for me and my life, my sense of self, my understanding of the Cosmos?" Those, friend, are the correct questions, but they have no simple answers.

The Grizzle may appear to be a mere tabletop roleplaying game with straightforward but deep resolution mechanics and a delicious mix of crunch and storytelling sensibilities. It may appear to be a powerful Sworddream, festooned with esoteric art by noted IRIMA (Internationally Recognized Multimedia Auteur) Aleks Samoylov. It may appear to be a fun and irreverent take on the tabletop roleplaying games of yore. And it is those things, make no mistake. But it is also so much more than you can even imagine. It is ancient and strange and beautiful. And it was born from within your very own soul as you spun the universe around yourself like a spider in its web!

But let us look at the thing before us, as it is and as it appears. You may ask yourself, "what are the various features of this remarkable and reasonably priced entertainment product, work of art, and meticulously restored ancient metaphor for the very process of creation?" Well, to that question there are answers! And those answers are as follows:

Straightforward "dice pool" resolution mechanic. The unparalleled satisfaction of taking a whole handful of six sided dice and rolling them across a table can, indeed, be yours (unless you're playing online, I guess, which you probably are, because of The Plague ... But, you know, maybe someday we might be able to play with friends again in person. I heard there was a vaccine now ... and in just under a year's time we might even finally have herd immunity ... in some places ... maybe)?

Partial successes are definitely a thing, not unlike the wildly popular Powered by the Apocalypse systems (the way success and failure are calculated is different, but the basic concept is pretty similar). Every roll is an opportunity to take the story in a new and unexpected direction!

A simple, flexible, and modular character creation and advancement system. While a player character starts off with 1 "Class" and 1 Distinction, the player can then spend Potentiality (it's one of those fun abstract tabletop RPG "currencies," like experience or karma) to diverge into any kind of twisted skills-chimera that they want to play!

Easily scales between short term and long term play. If you're playing a one shot or a short series, just start off with extra Potentiality and make the characters of your dreams. If you're playing in a long-form, ongoing campaign, feel free to take it slow, if that's your thing. There are always new places to go and new things to see.

Play any kind of character you want. You can be any species known or unknown, or a robot, or a sapient concept, or a self aware mason jar, or a ghost, etc. This does not affect the game in a mechanical fashion, so get wild with it.

A collaborative and consensus based approach to world building and storytelling. The GM (known in The Grizzle as The Grizzler) is forbidden from doing ANY prep. Forbidden! While their player character is "the universe itself," they do not actually have any more (or less) agency than the other players (The Grizzler is encouraged to accept that they are, in fact, a player) when it comes to world building. You will build the lore and the world as you go, together, much like you would in a GMless Storygame. Build, explore, experience, build some more, rinse, repeat!

Using systems of chance and oracles (Tarot cards, tea leaves, etc.) is explicitly encouraged if you ever need to spark the imagination machine. The dice are great for conflict resolution and for modeling the way a character interacts with the world. They might determine how something happens and what happens. Sometimes, especially when it comes to the improvisational verve of The Grizzle, you may want to reach outside of yourself to discover what waits behind a locked door, why everyone in the City of Broken Keys wears porcelain masks, or the very fact that they do that in the first place. Pull a card, read the augury in the wind, look at an inkblot, associate, dream, be! It's the gosh darn Grizzle!

Player characters (referred to as Zees, short for Grizzees) only die or are permanently retired if their player wills it. Otherwise, they might get injured and suffer losses, but they've got "plot armor" so long as the player wants them to. This is The Grizzle, but it's not a survival game or a game about grit. It's a game about Adventure, whatever that may mean! And about telling cool stories. While many of the old school sensibilities are there when it comes to exploration and interaction mechanics, The Grizzle treats Zee players like authors as opposed to contestants or adversaries. The same goes for The Grizzler. They're not supposed to be out to "get" each other.

And more, I'm sure! (Covid has delayed this game by close to a year, so my grasp on it has become fragmentary and twisted, much like the rest of my 2020 C.E. experience, but I do know that this game is full of cool possibilities).

In order to download this tabletop rpg you must purchase it at or above the minimum price of $10 USD. You will get access to the following files:

Support this tabletop rpg at or above a special price point to receive something exclusive.

I have some excess physical copies left over after the Kickstarter, so I figured I'd make them available while supplies last, so to speak. I'd be happy to sign your copy as well, if that's something you're into. Just let me know when you claim the reward, under the address form.

I've gone ahead and included approximate shipping cost (via USPS media mail) in the total price, so no need to worry about that. 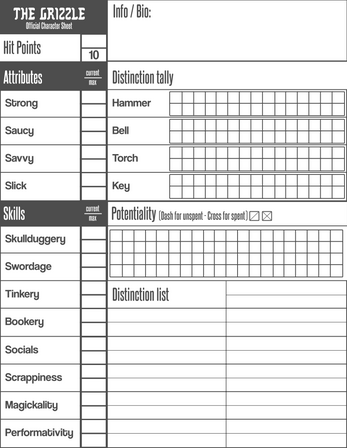 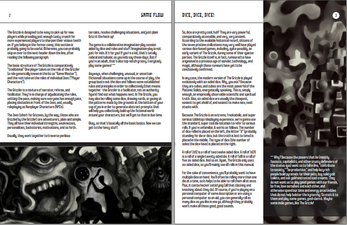 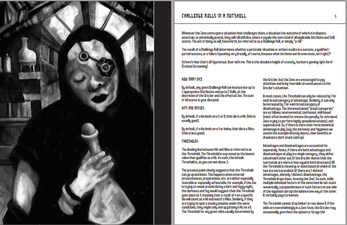 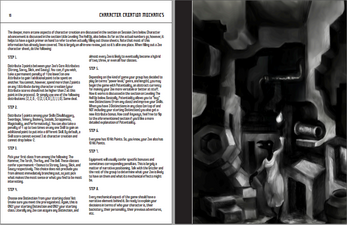